It wasn’t often Helliandra got to leave the big city. Part of her course curriculum required a visit to the far off Museum Island called Atheneum. As she wanted to be in politics, it was practice to learn about the past wrongdoings of ages long gone.

Atheneum was told to be a place trapped in time, with a similar flare for architecture as the cities of now, but with something a bit more primal to them.

While she knew it to be a sombre place, she still couldn’t contain her excitement. It wasn’t often one *HAD* to go visit Atheneum, giving her a free pass to take a day off her courses and make the trip. She decided she would fly her air balloon over, and enjoy the mild weather.

GenCiss oversaw the island, with the last of their people now caregivers of the clifftop museum. What little information she had of the site stated that the whole island was meticulously cared for. She looked over what pictures were included, comparing them to some of the older parkettes back at home. They looked lovely, though she felt they were too few.

While humans no longer had abilities outside the norm, for some reason the GenCiss did have a few rare traits, that allowed the island to only be viewed by those who were meant to visit. She was warned that she might see a sudden mist, even at her altitude, as she got to the coordinates that accompanied her visitors pass package.

She was nearly there, when the sky started to take on a purple tinge, and darkened. The clouds started to roll in, and soon she did see the mist forming, as she ventured nearer to her destination. While the clouds seemed turbulent, her balloon stayed true, breaching the mist. She couldn’t see a thing, guiding herself with her compass only. This was truly an adventure! 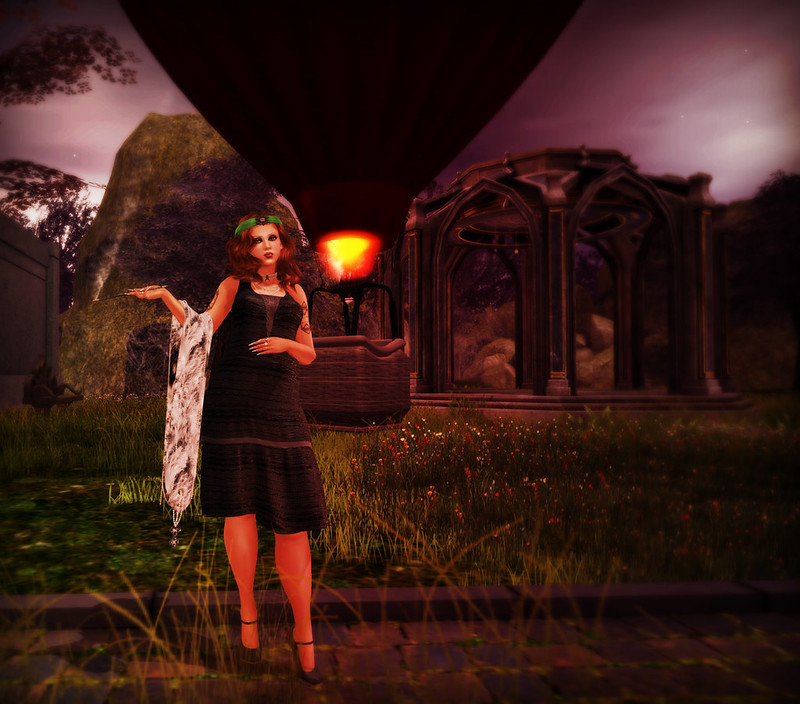 She could feel the mist thinning by the moisture content decreasing. Stepping closer to the edge of her basket, she saw dark shapes forming, then suddenly she was in the clear. Oh the view before it, the information package had no hope of capturing this! She didn’t know where to look, but had to concentrate on finding a landing for her hot air balloon. She saw a bit of a clear spot near the centre, and proceeded with decent measures.

“Next Time, I’ll just take the shuttle . . . ” she murmured to herself. Helliandra just wanted to be done with her task you see, so she could go off and explore. She had seen a few souls walking about, the GenCiss fairly easy to discern with their black, grey and silver robes. There were some visitors like her as well, moving around the land. they had looked like ants, during part of her decent. Now, they seemed to have disappeared. Everything was quiet where she had settled her balloon.

She had read that the GenCiss were highly intuitive, and would only come guide if a need arose in the visitor. She also heard that not much animal life remained on the island, as if they themselves knew that it wasn’t a typical place.

A bit on awares, if only for the extreme quiet, Helliandra climbed out of the now secure basket to the ground below. She felt a jolt go right the tip of her toes to the rest of her body, before dissipating off. Shaking off the weird feeling, she took her first steps. Near her was a beautiful fountain, topped with all things, a giant urn. The water bubbled forth, much as all fountains, but it seemed so quiet. It was like the water itself understood the place it was in.

A bit off from the fountain was a beautiful cemetery, full of above ground tombs of old. She walked along with twinkling ivy path, until she reached a large tombstone. Markings were worn off with time, many etched aged ago, names and dates of old. The placard said GenCiss. These were all the members who had served and died here, since Atheneum came to be.

While the Families got the whole island, GenCiss got to have this one little place. She felt like information was just rushing at her with each touch of an object, each blade of grass. She had never experienced anything like this, but understood the lack of guide. There was no need for a tour, when the island itself could speak to you.

She left the parkette to move to another part of the island, the north side, with the large cobbled lane. It travelled by many family mausoleums, filled with images of ages long gone. These were the ashes and bones of the Families, the most powerful humans to ever live. They had gained abilities, through genetic abnormalities, which the GenCiss had nurtured with science. Names and names flooded to her, as she glanced at the pictures. Each had a story, some bits and pieces trickling in, more on the ones she looked at the longest. She was sure she would have a headache tomorrow, it was like directly downloading a history book, right into her head.

Between each mausoleum was a space, each a little different, but they allowed for rest and reflection. Looking at it from above, it had seemed like wasted space, having so many little green alcoves. Now she understood. Too much information at once.

She stepped beyond a bush, and came face to face with a statue. A little startled, she looked up at the figure. It was of a woman, but one that seemed almost merged with the land, vines and branches overtaking her body, until she almost looked a bit like a tree herself. The placard here said Nylund, which was one of the 4 families. She knew what this was, this was the living statue, the last Head of Family Nylund, the Matriarch Felicia.

Looking upon her, she seemed fierce and peaceful, if that could be a thing. Helliandra knew that there was multiple statues on the island, each with it’s own soul trapped within, a burden carried by the heads of each of the families, as well as a few of the GenCiss. She knew, and had read and reread it in her package. Seeing one in person was not what she expected, and a bit disconcerting.

She knew the statues were there to answer questions, for it was their task. They were here so the future of humanity wouldn’t repeat the past. They could answer anything they themselves knew, right from the source of the history of the Families. There was no inaccurate textbooks to read. You just asked your question and knew. Knew exactly what had happened. You could view the downfall right in their own eyes. Trapped there for all time.

She very slowly reached out her hand, until she touched the base of the statue. With that, the statue began to glow in places, powers of old harnessed within, igniting the soul to respond. Though the statue did no move, a sense of watchfulness overcame Helliandra. Felicia was there, ready.

“Child, it has been a long time since one such as you existed.”

Helliandra was confused. The voice was right in her head. Unlike the rest of the island, the information didn’t pass right to her. The statue actually talked, in her head!

“No need to fret, there is a lot that must be done, now with your arrival and all.”

“My arrival, you were expecting me?”

With that, a command, Helliandra drooped slowly, right there at the base of the statue. Ivy moved, gathering her body and shrouded it within. It moved her along, all while the statue looked on, unmoving. 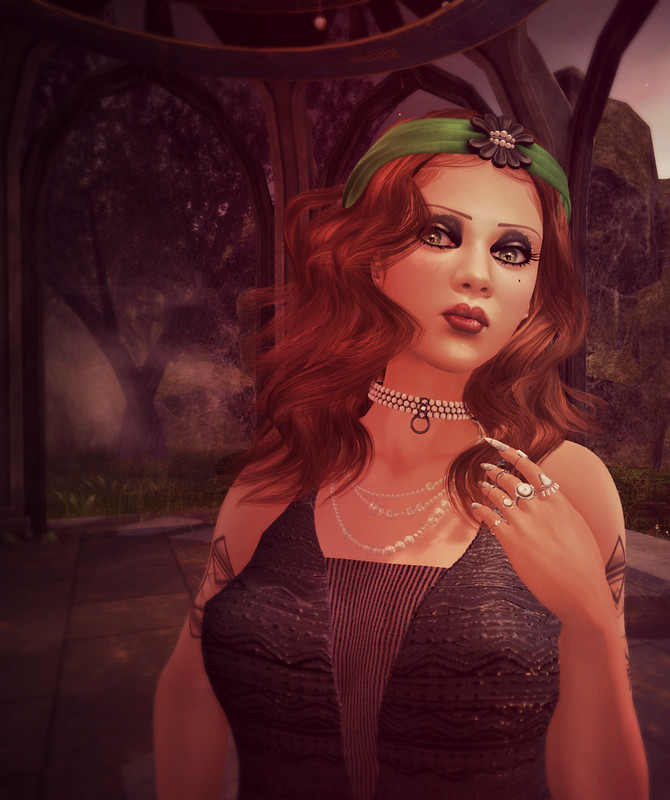 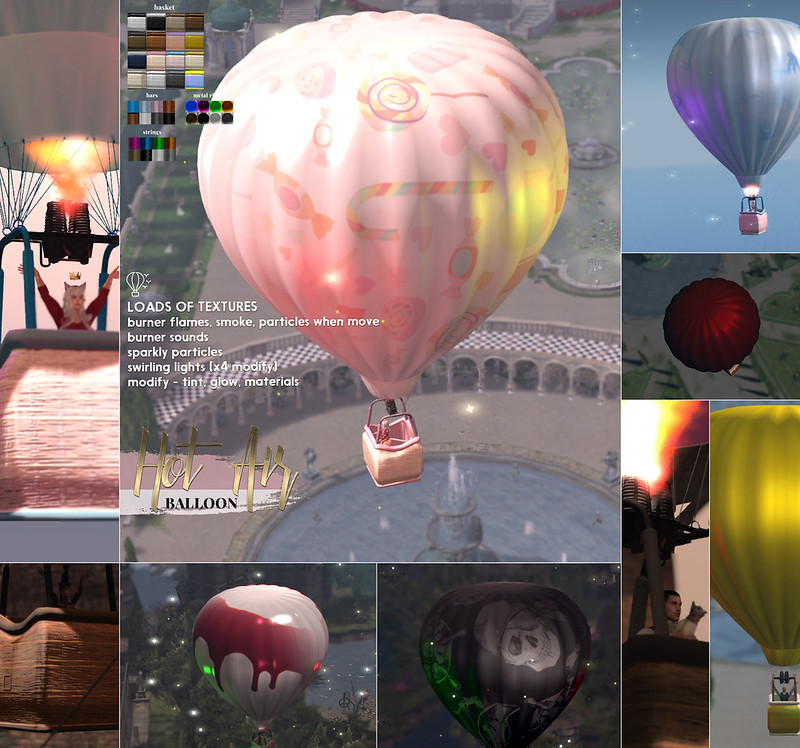 Birth has made these wonderfully fun hot air balloons for their RFL item this year, for Fantasy Faire. What better way to support a cause and also have a bit of fun! There are two colourways, with many options each, and you can either wear the balloon as you travel around, or have it as a rezzable object for your own lands.

Shoot taken at the Atheneum Sim, Sponsored by Second Life Syndicate (Yup, we totally made that!).