Working as a Coast Guard isn’t necessarily hard, but I do enjoy the end of my 6 day week, when I get to go to the market.

Getting out of my stuffy uniform, swimming the sun warmed coastal waters and taking my time to for a leisurely swim is what I look forward to the most. Nothing beats weaving through the sun rays lighting the surface waters.

One of the things I like most at the market if the food! Oh, I would go every day if I could and stuff myself full. The Vendors know me there and often put a little extra into my packages I order.

We sharks sometimes get a bad rap, but I think I’ve helped turn that about, with my work and my brothers. They work as lifeguards along the coast I work at. I might have an appetite, but but my mood is never foul, like my northern cousins. Those muscle bound meatheads are a bit temperamental and have been known to bite first and ask questions later.

Enough of that, I’m off to enjoy my day! 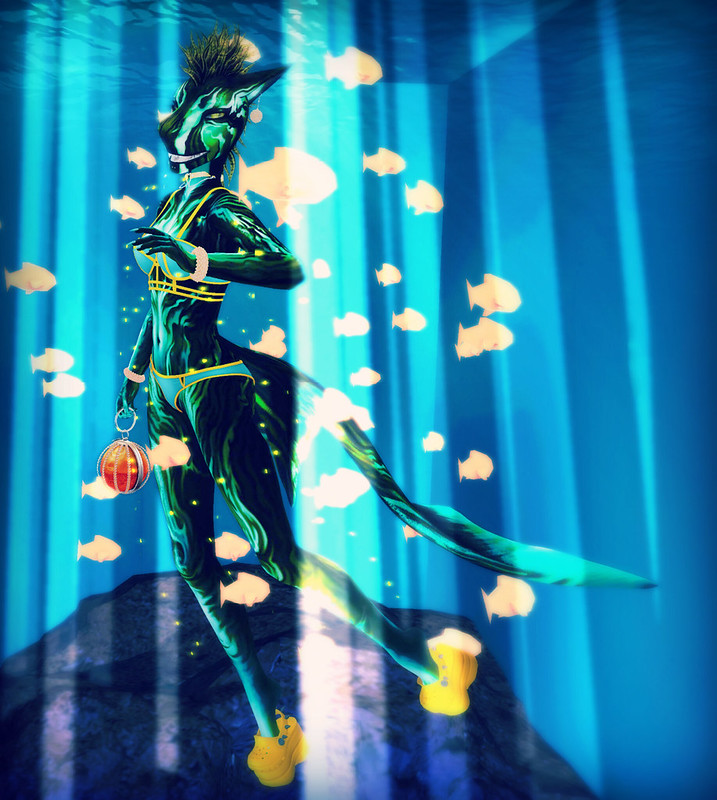 Abnormality is a new event that just opened, with the focus on alternate avatars. This is not a furry specific event, though furries and their creators are welcome. Think of it more for humanoids, that aren’t human. Aliens, Elves, Hybrids, Bionics and Furries, just to name a few.

Also, if you always wanted to try being a furry, but all the parts and whatnot have scared you off, you can find full avatars here. You don’t always have to start out getting all the parts form all the designers. Furries like to be as unique as they can, but it doesn’t mean you can’t work yourself up to that.

Many Mod Designers are now catering to SLVU BOM, so it will work with your favourite SLVU based body, if it is BOM enabled. I am wearing Maitreya here, and this modpack does work fine of my favourite Slink body just fine.

Don’t be discouraged about not having critter hands and feet to start. Transitioning or even just having a fun once in a while avi doesn’t need to be hard. By using your body of choice, you don’t have to get a whole new wardrobe, and can still work with all your bento nails, rings, footwear. You don’t have to start big right off. Collect what you like as you can. No one is going to bother you about your human digits. If they do, well they are just asses, and that is who gets the furry community a bad rap.

I made this pose! You know how are it was to find a fashiony pose that looked like you were sort of treading, but under the water instead of above. So hard, I just didn’t find a single thing! So I decided to give it a good go and make my own. The last time I made a pose was when Ozimals opened and had a hunt, so it has been a good number of years!

This pose doesn’t have bento fingers, I’m not that advanced, but will work with higher priority bento hand huds, and the build in hud Maitreya bento hand poses. I also made it to work with the purse, which had it’s own pose, so the look will be slightly different with the purse not worn. I positioned that right arm so it still sort of looks like you are treading underwater.

I’m tempted to learn the finger bento stuff now, so that might be a thing somewhere down the road. For now, you can grab this pose at my mainstore, The Stringer Mausoleum, at the front area, by all my event and media signs.

I also threw this mohawk I’m wearing, by far one of my most favourite designs I’ve ever made on the grid, into my store group, as a gift. I don’t have it anywhere for purchase, so thought it was a decent substitute, so you can still grab it if you want it.