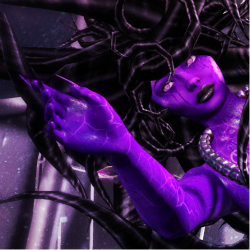 It seems like Zypher is always getting into trouble. She was minding her own business, when she noticed a ship with a distress signal not too far from her current heading. Being the great galactic citizen she was, she thought to veer off course and see what it was all about. When she finally arrived, she noticed what the true issue was. The ship looked overrun by a plague to her people, the Nirgles, symbiotic alien creatures, who must have hosts to fully survive. They were hard to get rid of, as they could so closely mimic their host, it was hard to tell anything was wrong until it was too late.

The Ship seemed very foreign in nature, not something she had seen before, but the creatures within must be compatible enough with the Nirgles. They wouldn’t stay if there wasn’t full melding with the hosts. It was too much trouble for them to have to constantly fight them internally, when trying to meld.

Looking out her viewport, trying to think on what she wanted to do, she heard a beep. Glancing at her control panel, it seems she was being hailed. Pressing the blinking light, coms static filled the room.

“Hello, This is Zypher, Captain of the Grapleon Federation Ship, SCF Shankrele. You have Hailed me?”

“Hey Lady! This is not a time for pleasantries, we have a bunch of . . . things on board our vessel, taking over our crewmates minds. They are killing their own people and have us holed up on the upper decks. We need help, do you know what these things are? How many are you and do you have big guns?”

“I thought you just said they have taken over some of your crew, and now you want to know if I have technology to to kill them? I am thinking you are not part of your Command Staff.”

“No, they were the first ones these things took over. We don’t even know what they are. It happened so fast, and it was hard to tell what was going on until they already had like 75% of the crew . . . converted.”

“That is how they do things. Just know, they want you alive, more than dead. They will try anything possible not to kill you. There are ways to extract them from your crew, but it is a bit of a process, and not one we can do here. I am going to tow you to one of my people’s Outer System Hospital Arrays. They are set up to take care of situations like this. It will take some time to get there, with me towing your ship. We got to keep them busy until then. I’ll let them know we are on their way, maybe they can get a bigger ship, and reel you guys in faster than mine.”

“How do we go about keeping them distracted?”

“How many women do you have left unconverted?”

“What does that have to do with anything?”

“Well . . .These things, they are called Nirgles, their main mission is to make their population flourish. They do that like any race, but for them, their gestation is really fast. They don’t have the body type to incubate a fetus, nor eggs. They use their hosts for this. I’m not going to get into it any further, but they will target your females first, so if you have some with you, you need to protect them, but keep them moving around. Don’t keep them all together either. We need to keep their focus all over the place to give us time to get to the Array.”

“Seriously, snap out of it, she isn’t dead. They wont kill her. Due to a past encounter, I no longer can be taken over by these things. I can come over and help, if you can figure out where to let me in.”

“I have to ask someone who might know better than I how to get you on board, give me a bit of time, and I’ll tell you where.”

“That is fine, I’ll be waiting. Zypher Out.” 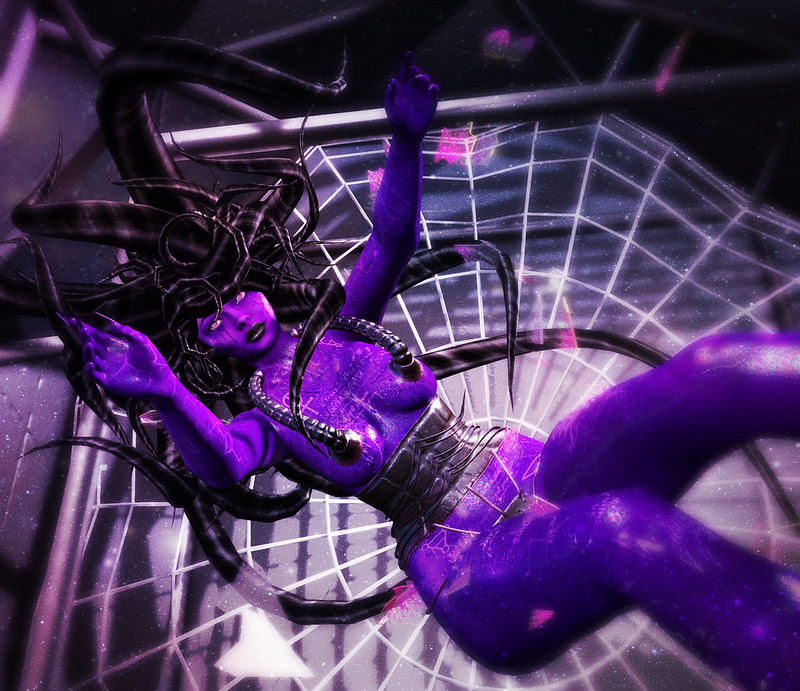 Zypher, looked out the viewport, watching flashes through the windows of the upper decks, on the neighboring ship. She could remember what it was like, fighting for her life, trying to stay out of their clutches. Her people considered the Nirgles to be atrocities. Sadly those who happen to get their minds hijacked, even if briefly, live the rest of their lives with a social stigma. Zypher was one such case, having been on a ship at a young age, that crossed paths with the Nirgles.

Their Healers, who were also considered among the holy, had saved her. It had taken weeks to get the thing out of her head. She soon found out that they also marked her body with holy symbols, implanted a cerebral pulse chip, and turned her womb to metal. There was no way to hide what happened from her people, many scampering away from at the site of her. Her elders told her she had a new purpose, to help keep the galaxy safe from the surge of Nirgles. She was to become a warrior, one that no Nirgle could ever harm again.

Her people had went to extremes, there was no need to void her womb, no need to mark her. While she was very bitter about it, it was, in the end, all due to the Nirgles. The training helped her ultimate goal, to make them suffer, like she did. To take away from them what they took from her. She lost all her family and friends, had become a social pariah. Only the Healers and Elders would talk to her, and the occasional other survivors she crossed paths with.

Her race had long lives, and over the years, she had cleansed so many areas of these things. While sometimes she grew tired of it, she always regained focus. She would not rest until she was either dead, or all of them were.

Going back to the coms panel, Zypher tried to hail the man she was just talking to moments ago. After a few tries and no response, she scanned the ship, and tried to figure out which dock would be the best one to breach. There was a lot of life signs on the 3rd level. She could normally tell which were the Nirgle lead hosts, they ran really hot, but all the life signs were reading hot. Must be typical of this species. They spoke Galactic, so were part of the Federation, but she had never encountered anything like their ship, so wasn’t sure what they were.

Jumping into her personal space pod, she quickly went thru launch procedures and did a few laps around the other ship, scanning all the way. Once she found a dock she felt would be the most beneficial, she locked on.

She quickly bypassed their decontamination procedures, opening the airlocks and stepping into the ship. Lights flashed everywhere, and booms could be heard from somewhere else on the ship. With her weapons in had, she quickly jogged down where she had seen a rather large huddle of life signs. To the end of the corridor, she could see a bunch of aliens trying to keep a security slider from being pried open. Rushing to help, she hear another slider shut into place behind her. Glancing back, she saw containment webbing deploy along the surface.

Turning around, now all the aliens were on the other side of the original security slider. It only took her a second to deduce what had happened. It was a trap all along. One set specifically for her, or another warrior of her kind.

Charging the slide, she was feet away, when it was blasted apart, shards hurtling toward her. They embedded into her flesh, making her cry out. The blast was enough to throw her forcefully towards the webbing.

The Nirgles led their hosts towards her, grinning.

“We have finally caught you, again. This time there will be no help from your people. We will be taking you to our homeworld. You will be a symbol of what is to come of this part of the galaxy, the mother to the destruction yet to come.”

It made Zypher shiver. Not in fear, as the onlookers thought. While they took away her life, family and future, what she could bring them in return was now far greater. She was saved, those many years ago, with her mind and womb tampered with by her own people in the process. The augments made her a very inhospitable host. The cerebral pulse chip both fried and froze anything foreign in nature, while her womb could no longer bare a single lifeform. It also could fry and freeze, but it’s main function was far more sinister. If she was killed, and she would be, with her main function as a woman taken away, he womb would set in motion a self destruct sequence. Basically her womb was a ticking time-bomb. And it was on it’s way straight into the core of the Nirgles.

She smiled as the containment webbing wrapped around her body, shocking her, and sending her into a deep sleep. 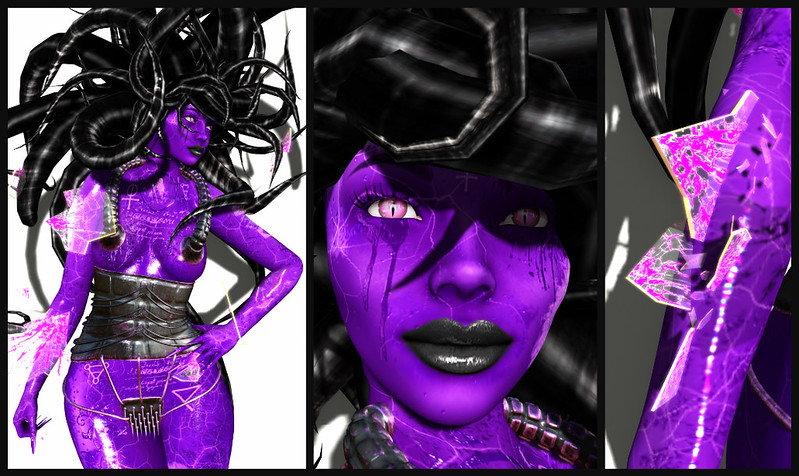 Necrotize ends today, that is right TODAY! If you want to get your Sci-Fi horroresque Xenogoo on, you best get your butts over there, as another wont be around until next halloween.